Sometimes a 0-0 draw feels like a win for a team.  Sometimes it feels like a loss.  This game definitely felt like a loss, even though with results elsewhere in NASL, Minnesota remains 3 points clear of second place.

Minnesota controlled the game, and dominated the shots on goal.  They still couldn’t find the back of the net.  There were three reasons that Minnesota couldn’t score, besides just bad luck.  It wasn’t just about a failure of the strikers to finish, but also a problem with touch and the defensive formation of Carolina.

Carolina came in with one thing on their mind, slowing down the vaunted Minnesota offensive.  Take a peek at Carolina’s defense on an attack early in the first half.  There are 8 orange jerseys in the box, and one just outside of it. 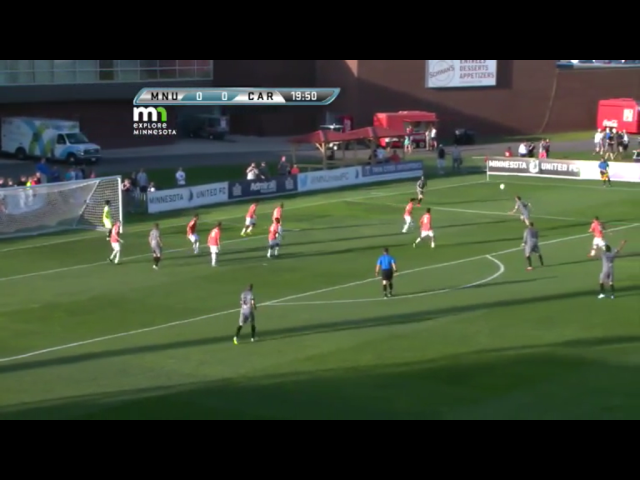 Carolina Railhawks parking the bus in the box.

Carolina was hoping hoping to take a 0-0 scoreline late into the game when they could sneak a goal in and steal the win.  While they weren’t able to steal a win, they did walk away with a away point, which they have to be happy with.

Minnesota took a lot of shots, but with the formation that Carolina was playing, they had little hope of many of those shots going in.  On this attempt by Ramirez, you can see that there is a swarm of Carolina defenders around him and there is room for a shot to get through on goal.

Ramirez trying to play pinball with the orange jerseys standing in as bumbers.

Too many passes were in bad positions for players to run on the ball.  On this pass, Ibarra just passes it over the box to no one.  Through balls were behind players, causing them to have to slow down their attack, which allowed the Carolina defense to get into position to stop a pass.

Ibarra skied it looking for the cross.

How do you beat a team focused on Defense?

Carolina sat back and looked to defend first, and counter-attack when possible.  Minnesota couldn’t find a way to break it down effectively.  FourFourTwo has a good video explaining one way to beat this kind of defense.  Basically, the team needs to move it in and out of the attack to get the defense to come out onto the midfielders with the ball and get out of position.

I know some people want to see Jordan get the start, and he might next week with Dias out with a red card and Calvano possibly out with an injury, but his game remains one of high energy and a lack of polish.  Nonetheless, he’s a great player to bring in off the bench, as he will fly around and put his stamp on the midfield, bringing a spark to the team late in games.

Calvano will be missed if he is out for long

Calvano has been an amazing asset for the team, not just on defense, but also in bringing the ball up from the back.  At least once Pitchkolan fell back into centerback to allow Calvano to push forward in attack.  With the fullbacks pushing way up in attack and Ibarra popping up anywhere on the field to receive the ball, the team is playing really fluid, attacking soccer.

Daley looked like he was playing a different game

Daley came into the game, and seemed to throw off the team.  Watson had been warming up, and probably would have been a better fit.  Daley pushed Mendes to the left, where Mendes disappeared, having little to do with the game after that.  In addition, Daley gave up the ball a number of times, and then had a terrible red card at the end of the game.  He just isn’t the player he was at the end of last year.  I’ll be interested to see how many more opportunities he gets with the first team.

Midweek Game against Menace this week

I expect to see Dias get the start, with him missing the game next weekend, and Calvano resting, even if he’s ok.  With it a Cup game, expect the team to start a lot of bench players.  I’m interested to see if Ramirez gets the start as well.