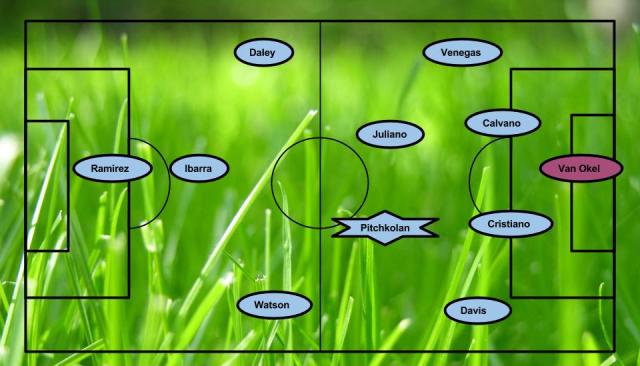 The only big change this game was Ibarra on for Franks, which was a move that I felt made a lot of sense.  We played a 4-2-3-1 again this game, and it seemed like Pitchkolan and Juliano both played a bit more evenly defensively and it seemed to function as a more traditional 4-2-3-1 than last game.   There were some wrinkles thrown in when Jordan came on for Juliano when he went off injured, but we’ll get to that when we discuss the Midfield.

Ottawa also played a 4-2-3-1, and yet Minnesota dominated the run of play.  It just goes to show that it is not just the tactics used, but how good your players are and how well they fit into the tactical formation you use.

The defense kept it’s shape well, almost the entire game.  Ottawa had few real chances on our goal and Van Okel did a great job coming off his line and taking away opportunities.  One tactic that I didn’t see a lot of last week that was very successful this week was the wings, Daley and Watson coming back to help along the sideline with the fullbacks.  It created a double team on their players and they struggled to get decent crosses into the box or passes to the middle.  Another team that has a midfielder make a run to the corner would be able to beat that double team, but against Ottawa that wasn’t a concern.

While the centerbacks, Calvano and Dias, had good games for the most part, they were to blame for the goal.  It appeared they were caught ball watching, which allowed Ottawa’s player to sneak in and head home the equalizer.  There were a couple other plays where Ottawa was able to get a one on one on our centerbacks, which shouldn’t happen in the formation we play, as there should be defensive support from the defensive midfield.

The defense played a very high line, which combined with excellent pressure from the midfield, kept the Ottawa players from having much success moving the ball into our half or near the goal.

At the start of the game, Pitchkolan and Juliano were playing a very traditional defensive midfield role, with Pitchkolan playing a bit more in front of Juliano. Juliano played more of the holding midfielder when we had the ball, while Pitch pressed forward on attack. Still, there was less of the box to box role for Pitch in this game.

When Juliano got hurt, that changed with Jordan coming on.  Jordan was all over the field, which allowed Pitchkolan to focus more on his defensive responsibilities, although he did make some good runs into the box as well.  It felt in many ways like Jordan was the unsung hero of the game, with his constant pressure on the opponents when they had the ball and his work in their half of the field to maintain possession.

The game began with a number of long balls played to the wings Watson and Daley.  These didn’t have much success, and soon the team started working the ball up field with short, quick passes.  Ottawa’s defense sat back, giving the midfield lots of room to move with the ball.  Daley again showed great speed along the sideline, while Ibarra had a fabulous game on offense.

While not very effective on defense, Ibarra was amazing on the attack, both on the ball and making runs through the defense.  I don’t remember last year having this much ability to dribble the ball through the defense, and on a number of occasions Ibarra, Watson and Jordan, beat their defenders, which opens up so many more options on attack.

EDIT: I forgot to mention Mendes, one of the new signings for the team.  He didn’t do a lot for the team, the only big change being that he took over the center attacking midfielder role from Ibarra, and Ibarra moved over to the left wing.  Ibarra remained a part of the attack for Minnesota, but Mendes seemed to disappear.  I’m thinking with the number of players in the center of the field in the 4-2-3-1, the center midfielder needs to be able to assert himself into the offense.  So far, both Franks and Mendes has struggled with that.

I’ll say it, I think Ramirez is better than Campos, at least through these two games.  They do play a very different game, however.  Campos is the prototypical target forward, who plays with his back to the goal and holds up the ball and distributes it to other players making runs.  Ramirez plays the position a little differently, and is as likely to be making runs as holding up the ball.  While his finishing touch could use a little work as he had a couple clear goal scoring chances that he skied, the offense has looked much sharper.

Once again, the team scored a goal off a set piece.  This must have become a point of emphasis during the offseason, because they have looked much better both defending the set piece and using the set piece on offense.

1 Response to Tactical Analysis for Ottawa Away, April 19th